The Quest for the Ultimate

I have been asked to teach a course in comparative religions next fall, at nearby Salve Regina University, called “The Quest for the Ultimate.” Some people at my community of faith asked if I would also teach this course for our community I am so excited about this!  There is an ultimate dimension to this one “wild and precious life,” as poet Mary Oliver says. As grandiose as it may sound, that is the purpose of this blog, “Life as Spiritual Adventure,” to help to open or connect people to this Ultimate dimension of life.

Aldous Huxley, in his Perennial Philosophy, says, (1)“There is an infinite, changeless reality beneath the world of change; (2) this same reality lies at the core of every human personality; and (3) the purpose of this life is to discover this reality experientially; that is, to realize God while here on earth.” 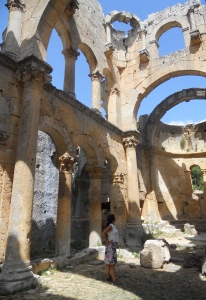 My son’s girlfriend, Erika, just returned from a trip to Alaska for her work. Most of the time she was in Alaska, she was on a ship in Kokiak, viewing the landscape from the sea. On her last day there, she providentially ran into a young woman, who with her husband does “Walk Alaska” adventures with tourists. Halfway through this walk this couple told her that they were Christian, and helped others to see the mystery and miracle of God’s presence in the Alaskan landscape. She showed us her photographs. For Erika, as for so many today who consider themselves, “spiritual but not religious,” it is the beauty, majesty, and vastness of natural wonders which connects her with the Ultimate.

Although I consider myself spiritual and religious, I concur. I am very excited for my own upcoming summer spiritual adventure hiking with my husband through many national parks in Oregon and California.

But other experiences reveal the Ultimate dimension of life to us as well. In my comparative religions course I will focus on the sacred texts of various faith traditions. Yesterday I was reading Karen Armstrong’s biography of the Prophet Muhammad, where she writes of the power of the Qu’ran itself, which opens people to the presence of Allah: …”Its verses were ‘signs’ providing a sacramental encounter with God. Muslims still experience a mysterious presence when they recite the Qu’ran or sit in front of the texts from the holy book that decorate the walls of their mosques…Later, some Muslims would claim that it was the utterance in normal human speech of the’Uncreated Word,’ like the Logos in the Prologue to Saint John’s Gospel.” (p. 126) 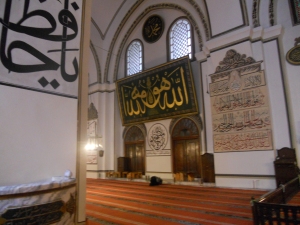 Having been to Turkey, and worshipped in mosques, I can say that this is true. We were there during the month of Ramadan, when there was a heightened awareness of God’s presence. It was very moving to hear the chanted call to prayer hailing from minarets across the countryside five times a day. For me this was a reminder that the Ultimate invites us into communion in every moment.

Later this morning I will teach a yoga class. In last week ’s class I was teaching people that the Sanskrit chant “OM” which often begins yoga classes is actually “AUM,” signifying the first, the middle, and the last letter of the Sanskrit alphabet, or the One who is our Beginning, our Middle, and our Ending. When I learned that that is what this chant signifies, I could not help but think of Jesus’ words in Revelation 1:8: “I am the Alpha and the Omega.” At the conclusion of Christian funerals we pray to the One who is our Alpha and our Omega, our beginning and our ending, and in Christ, always our new beginning, even after death. But to hear this chanted in the vibrational language of Sanskrit, or in the Arabic call to prayer, or in the preface to the Eucharist, in a sense makes God’s presence tangible.

Saint Augustine said when we sing, we pray twice. Music lifts us into the “mysterium tremendum,” into the Ultimate Mystery we call God. Armstrong speaks of a man named George Steiner, who says he does not believe in God, who nevertheless speaks of “…a text, a work of art or a piece of music yielding a ‘Real Presence’ or an experience of transcendence.” (p. 126) “Such art, Steiner argues, tells us in effect ‘change your life.’ It is an encounter with a transcendent dimension that breaks into ‘the small house of our cautionary being.’ Once we have listened to the summons of such art, this house is no longer habitable in the way it was before.” (from George Steiner, Real Presences: Is there anything in what we say? ) In other words, most of us live in houses that are far too small.

Jesus tells us not to build our house on the sand, but on the rock of God’s presence. Bawa, the Sufi poet and mystic, tells us: “Everything you see tells the story of God. God is outspread, filling the entire universe. So look. You exist in a form. God is without form. You are the visible example, the sun. God is the light within the sun.” (from Rumi’s Book of Love, edited by Coleman Barks). 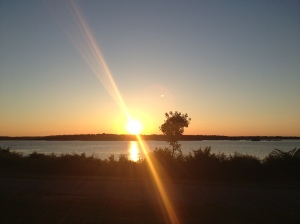 May you see every moment of this wild and precious life as a quest for the Ultimate. May you wake up and live every day as a spiritual adventure.
This day, may you see God’s Presence in all you encounter,
and may you reflect that presence to all you encounter.
Linda Forsberg, copyright May 27, 2015

2 thoughts on “The Quest for the Ultimate”