The Color of Water: In Praise of God as Mother and All Good Mothers

My favorite Saint of all time is Juliana (or Julian) of Norwich, 1346-1416, after whom my third child, Juliana, was named. She was the first woman to write a book in English. It was called Revelations of Divine Love. In that amazing little book, one of the things she writes about, one of the things for which she is most famous, is Christ as our Mother.

She did not pull this idea out of thin air. Jesus gave this image to her. As he entered the city of Jerusalem for the last time, as he entered the last week of his life, Jesus saw the crowds, and proclaimed, “Jerusalem, Jerusalem, how I have longed to gather you under my wings, as a mother hen gathers her chicks, but you would not!” (Matthew 23:37)
The Hebrew Bible as well refers to God as mother. Most of the time we do not notice it, because we simply read about God’s “compassion” or “tender mercy” or “loving kindness,” all translations of the Hebrew word “hesed,” which literally means “womb love.” The Hebrew prophets Hosea and Isaiah also speak of God as a nursing mother, who longs to feed us, to nourish us, with her consoling breast, and dandle us on her knee. ( See especially Isaiah 49: 14-16 and 66: 10-13). A beautiful image put forth by Juliana of Norwich is that of a pregnant woman. She says that just as a pregnant mother feeds and nourishes her child within her with her own body and her own blood, so Jesus our Mother in the sacrament of holy communion, wants to feed us, wants to nourish us, with his own body, his own blood.

This past weekend the assigned Gospel was John 15: 13: “Greater love has no one than this, to lay down one’s life for one’s friends.” The artwork on the cover of our bulletins showed Madonna and Child. I thought, “What better way to tie in the Gospel of the day with Mother’s Day than to focus on the aching, longing sacrificial Mother-love of God, of Jesus, and of some of the amazing mothers we know. I know without a doubt that my own mother would have laid down her life for me or for one of my sisters.

Years ago when I began cycling in a serious way. My youngest child, Juliana, was a toddler. I had one of those bicycle seats on the back of my bike for her. We would ride together in nearby Goddard Park. I will never forget an article I read in cycling magazine written by a young father, who was also a cyclist. He tells the story of one day, when he was cycling near his home on Cape Cod, on a long, straight, flat road. It was a glorious sunny day, and he had not a care in the world. All of the sudden a car came around a corner of a road that ran perpendicular to his road, and careened toward him. Instinctually he swerved his bicycle out of the way, and ditched his bike, but saved his life. Then he heard a cry. He had forgotten that his toddler aged son was on the back of his bicycle in the toddler seat! Thanks be to God his child was okay. But this young father was horrified by what he had done: in that moment when he had no time to think, he instinctually chose to save himself, and forgot about his child. He wrote that he KNEW that his wife would NEVER have ditched the bike with their son in his toddler seat, but would have instinctually tried to protect their son, sacrificing herself if need be. He wrote that that is the difference between male and female instinct. Mothers, who carry a child in their womb for nine months, have bodies which instinctually protect their young. Males do not.

I do not completely agree with him. I know some incredibly nurturing men, whom I know would react protectively toward their child. I think that as we evolve as a human species, more and more men are developing that nurturing instinct. But statistically, I am sure that a higher percentage of women have this instinct than men. 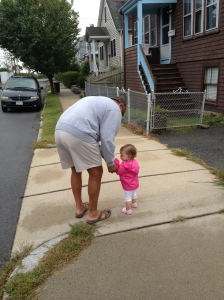 Jesus, I would posit, was one of those rare men, who, like Rachel before him, wept for his children. I think Jesus is weeping for his children today.
My sermon last weekend can be summarized in a photo I have of our grand daughter Sylvie and our great grandson Ayden. It is a beautiful photograph of these two cousins.

I showed a slide of the photograph to the congregation and asked, “Who do you think I worry about more in this world they are growing up in today?” Despite patriarchy and sexism, I worry more about Ayden. I think of Ferguson. I think of Staten Island. I think of Baltimore. I worry about Ayden growing up as a young black man. Why should mothers of black sons worry so much more than mother’s of white sons? Until the day when all God’s children are safely gathered in, I think Jesus weeps for his children. Our Mother God weeps for her children.

Last summer I read an amazing book I found at the book swap for hunger we had held in our church basement: The Color of Water: A Black Son’s Tribute to his White Mother, by James McBride. Growing up in a black neighborhood in Brooklyn, James McBride said he always knew something was different about his mother. When he asked her about it, she said, “I am just light-skinned.” When he got older, she finally told him her story. She had been born in Poland, the daughter of a Jewish Rabbi. When she was a young child, he moved his family to the deep south. As a teenager, she fell in love with a young black man. Because of this, she moved North, to New York. Eventually, she converted to Christianity, and with her husband started a Baptist church in Harlem. She had twelve children, and sacrificed to make sure all twelve children received a college education. Most of them went on to become doctors, lawyers, all kinds of leaders. MacBride said that as a child, confused about color and race, he asked his mother one day, “What color is God?” She replied, “The color of water.”

I love that: The Color of Water. God, like Water, is no color, but reflects all colors. God, in baptism, makes all God’s children one: “In Christ there is neither Jew nor Gentile; there is neither slave nor free; there is neither male nor female; for all are one in Christ Jesus our Lord.” (Saint Paul, Galatians 3:28, two thousand years ago!!!)

In last Sunday’s Gospel Jesus said, “Love one another as I have loved you.” (John 15:12) Again, consider this photograph. Until all God’s children are treated as equal, until all are one, Jesus weeps. Our Mother/Father God who is the color of water reflects and gathers into herself and equally loves children of every color. Last week’s text: If you say you love God, and hate your brother or sister, you are a liar.” (1 John 4:20)

Linda Forsberg, Copyright May 12, 2015
This blog is dedicated to my mother, Helen Stamp Forsberg, who would have been 88 years old today. I know she is now part of the Ocean that is God.